To train Faster R-CNN, just drop in your dataset link from Roboflow.

What is Faster R-CNN?

Faster R-CNN is a state-of-the-art object detection framework. It has been around for a while and has a lot of nice integrations. Despite its name, Faster R-CNN is known as being a slower model than some other choices (like YOLOv3 or MobileNet) for inference but in return is more accurate. It is one of the many model architectures that the TensorFlow Object Detection API provides by default, including with pre-trained weights, and the implementation in this notebook links in with Tensorboard.

The Faster R-CNN utilizes is a two-stage deep learning object detector: first, it identifies regions of interest and then passes these regions to a convolutional neural network. The outputted feature maps are passed to a support vector machine (SVM) for classification. Regression between predicted bounding boxes and ground truth bounding boxes is computed. Below is the general architecture for the Faster R-CNN: 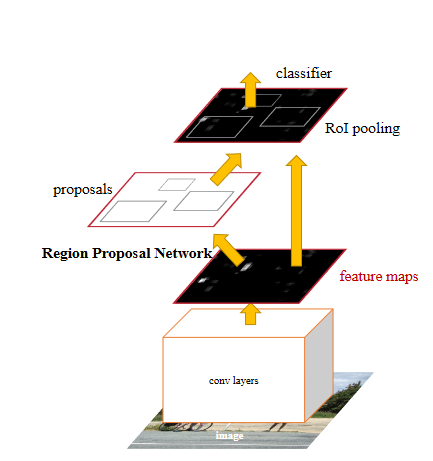 Training a TensorFlow Faster R-CNN Object Detection Model on Your Own Dataset: https://blog.roboflow.com/training-a-tensorflow-faster-r-cnn-object-detection-model-on-your-own-dataset/